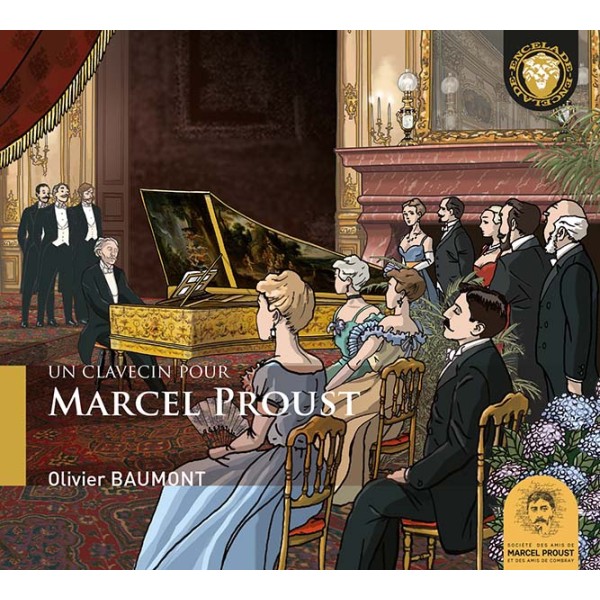 In this year of 2022, commemorating the hundredth anniversary of Marcel Proust's death, the idea of playing the harpsichord to evoke the writer may seem surprising... However, this is not a harpsichord for or by Marcel Proust, but a harpsichord for Marcel Proust. It is a tribute by a modern harpsichordist to the author of À la recherche du temps perdu, who lived at a period that is still too little known in the history of the instrument. It was during the years in which La Recherche du temps perdu was set, but also during the years in which it was written, that an exciting return to early music took place in France. Through the intermediary of publishers, performers, teachers, and instrument makers, a growing public began to take an interest in this music.

Very early on, as was also the case with painting, Marcel Proust (1871-1922) showed as much interest in music from the past as in that of his own time. In his letters, in his works, and to mention only the authors present here, the writer mentions Johann Sebastian Bach, François Couperin, Jean-Philippe Rameau or Domenico Scarlatti, as well as his friend Reynaldo Hahn, Jules Massenet (Hahn's teacher) or Maurice Ravel. And sometimes, here and there, Proust even mentions a harpsichord, a spinet...
Olivier Baumont's recital, featuring soprano Ingrid Perruche, violinist Pierre-Éric Nimylowycz, and harpsichordist Nicolas Mackowiak, alternates music linked to people who existed (Léon Delafosse, Reynaldo Hahn, and Louis Diémer), and others linked to figures that Marcel Proust created in À la Recherche du temps perdu (Albertine Simonet, Charles Morel, and the narrator). Placed in the middle of the disc, Eugène Anthiome's Toccata, recorded here for the first time, is in a way the generating cell of the whole programme, being dedicated to the composer and virtuoso Léon Delafosse, Charles Morel's model in the Recherche.
Anna de Noailles described Proust as a 'pure harpsichord player'. In the Nouveau Larousse illustré edited by Claude Augé, published between 1897 and 1904, the article "CLAVECIN" mentions a little-known definition of the word. In poetry, a harpsichord "is said of the whole of a poet's means, of the extent of his genius." Yes, this "pure harpsichord" is indeed a rich and beautiful idea to characterise the "extent" of Proustian genius!
Olivier Baumont

Biography
Curious, passionate and erudite, if Olivier Baumont's qualities as a musician are quickly recognised, his acute sense of communication (master classes, conferences, radio and television broadcasts), his joy of being on stage and sharing his taste for the 17th and 18th centuries with other arts, are also acclaimed and make him a multi-faceted artist, sought after internationally. His discography, regularly awarded, includes more than sixty recordings devoted to Bach, Couperin, Handel, Purcell, Rameau or Telemann... He has published several works on French baroque music and recently a Tombeau du jeune monsieur de Cinq-Mars. As a professor of harpsichord at the Conservatoire National Supérieur de Musique et de Danse de Paris for more than twenty years, Olivier Baumont has trained a number of harpsichordists, many of whom are among the most active and gifted on the current musical scene.
More information on http://www.olivierbaumont.fr/